Arrokoth is a large asteroid whose orbit extends beyond the orbit of Neptune. NASA JPL has not classified Arrokoth as potentially hazardous because its orbit does not bring it close to Earth.

Arrokoth orbits the sun every 108,000 days (295.69 years), coming as close as 42.13 AU and reaching as far as 46.71 AU from the sun. Based on its brightness and the way it reflects light, Arrokoth is probably between 16.314 to 36.479 kilometers in diameter, making it larger than 99% of asteroids, very roughly comparable in size to the city of Indianapolis.

The rotation of Arrokoth has been observed. It completes a rotation on its axis every 15.92 hours.

Arrokoth's orbit is 41.10 AU from Earth's orbit at its closest point. This means that there is an extremely wide berth between this asteroid and Earth at all times.

Orbital simulations conducted by NASA JPL's CNEOS do not show any close approaches to Earth.

Arrokoth's orbit is determined by observations dating back to June 26, 2014. It was last officially observed on Oct. 22, 2014. The IAU Minor Planet Center records 58 observations used to determine its orbit.

Scientists have been able to determine this object's shape: 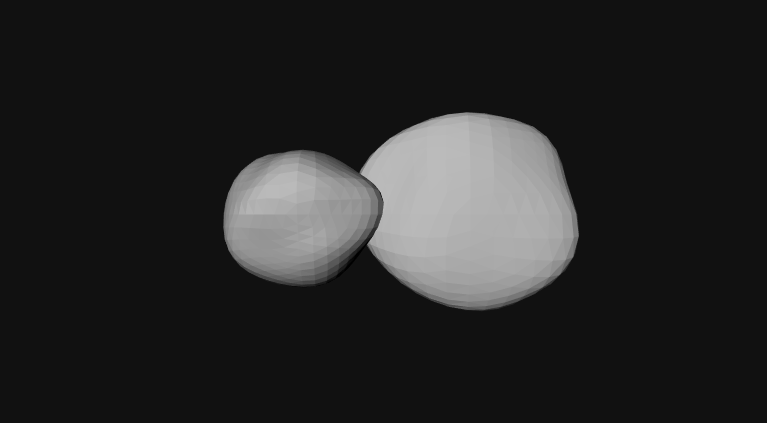 This asteroid is not considered a viable target for human exploration by the NHATS study.

These objects have orbits that share similar characteristics to the orbit of Arrokoth:

or view a random object

The position of Arrokoth is indicated by a ◯ pink circle. Note that the object may not be in your current field of view. Use the controls below to adjust position, location, and time.